Yazidism is a religion of almost one million people who mostly live in Iraqi Kurdistan. Being one of the oldest monotheistic religions of the world, it holds similarities to both ancient Mesopotamian and Abrahamic religions. Kissing thresholds and trees in deep respect of nature, and believing in one God represented on Earth by seven angels are among their traditions, passed from generation to generation mostly through storytelling. For them, the holiest place is Lalish – a temple with a few neighbouring houses set in an environment that is believed to have inspired the biblical Garden of Eden. All Yazidis are expected to make a pilgrimage to Lalish at least once in their lifetime but many visit Lalish every year, welcomed by the only people who live here permanently – the spiritual head of the Yazidi community, baba sheik with his family, and the faquirs, keepers of the fire.

However, there are also others staying. People who have escaped genocide and sexual slavery perpetrated by the ISIL. Yazidis are one of the most targeted groups – for them, Lalish is the only safe place where they can hide. Their last sanctuary.

With fear in eyes, they contemplated us staying the night in their temple. After a while they ceased to fear us – they talked to us in a language we don’t know a word of, women were inviting us to dinner, children were playing with our ukulele, baba sheik even requested a song himself. But the fear in their eyes was still there. The next day, a young red-haired faquir showed us around the whole temple. We have seen the morning brushing of teeth, killing of sheep in usual preparation for lunch, the darkness of thousands of years old temple rooms and pilgrims from villages nearby. We have seen the fear in their eyes.

I think, when life is on the edge… 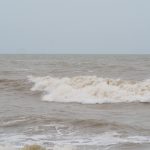