My morning is quick and the water in the shower cold. The sun hasn’t reached it yet. I am making some black tea; with milk to have the ‘ever black’ Middle-Eastern-tea a tad differently. I enjoy the short period of quiet before first children start turning up for their lessons twenty minutes early. I sit on the balcony, sip tea, observe olive plantations full of sunlight and read. Or write long emails. The Syrian families live in small constructions covered by UNHCR plastic sheets around and in the village, everywhere they’ve been allowed to pay rent. They are not very far from home, only a few kilometres, but some of them have been temporarily staying in Northern Lebanon for over 7 years. The parents are contrasting. Some don’t miss a chance to invite us, volunteers, for tea or even a meal while some don’t miss a chance to request yet another impossibility. Their children keep running around the village and to the Peace Centre. A big house with a garden and a garage turned into a classroom, where we run lessons and workshops or play games together. And it is normal. As a fellow volunteer Jack beautifully said: “I was teaching normal children, who can be sweet, devilish, and who dream like all children. It was a very ordinary experience.” And looking back, this is where the greatest challenge we have faced might be stemming from. To fully realise that they indeed are normal children and make them feel they are because they deserve to feel that way.

But before I finish my email on the balcony, someone is already explaining to the loud ensemble gathered in the meantime, that for half of them, their lesson only starts later in the day, what they are very well aware of and precisely for that reason they came here—not to stay home for another hour or two. The other half can begin their French lesson—they will need it to survive in the Lebanese school system. For some of them it is probably too late, but to stop trying is beyond the capabilities of an idealistic volunteer. In the meantime, I am editing thousands of photos. That is because I was very lucky to arrive on the same day with Lucas, who was carrying 6 cameras, chemicals and great ideas and I said I will help him manage that. On the first days, we started by explaining how to hold a camera and press the shutter release which led to the overwhelming amount of photographs. Then we did some water splashing and captured it with quick shutter speed and later went on a trip to the mountains too. We could see Krak des Chevaliers and close-by villages in Syria from up there. As time progressed, child creativity exploded. With the help of Arabic speaking Jack and Alice, we gave them a little guidance and unleashed creativity shaped into stories. Stories about flowers, rivers, or fighters. The expressive power of photography was being revealed. It was beautiful, enlightening. Us, westerners teaching photographic storytelling to them, unlucky kids. Us and them. It is us and them, not all of us. And they are actually from a culture which never even used visual depiction as a means of anything.

So, what is the implicit meaning of volunteering. 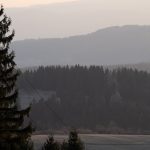